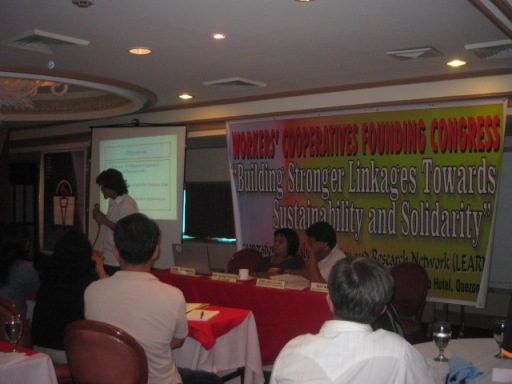 “Building Stronger Linkages Towards Suatainability and Solidarity” was the main theme of the Federation of Cooperatives of Workers Organizations (FedCoWorkers) during their Founding Congress last May 8-9, 2008 at Sulo Hotel, Quezon City.

15 workers’ cooperatives have submitted their resolutions approving their participation as one of the founding members of the federation. Olof Palme International Center (OPIC), Swedish Food Workers Union District 1, AKBAYAN and Labor Education and Research Network (LEARN) have expressed their solidarity messages and congratulated the founding members of the FedCoWorkers.

One of the highlights of the Congress was the presentation of the research made by Erik Villanueva and Jude Esguerra from the Institute for Popular Democracy (IPD) entitled: “Towards Social Movement Cooperative Strategy and the Solidarity Economy” and also the ratification and adoption of the Constitution and By-Laws and Articles of Cooperation of the new coop federation.

The newly elected officers of the federation were: Raymundo Fajardo-Chairperson, Arthur Guda-Vice-Chairperson, Norzamia Intal, Plorcerfida Malasigan and Porferio Fin as Board of Directors. The workers cooperative founding congress was facilitated by LEARN.