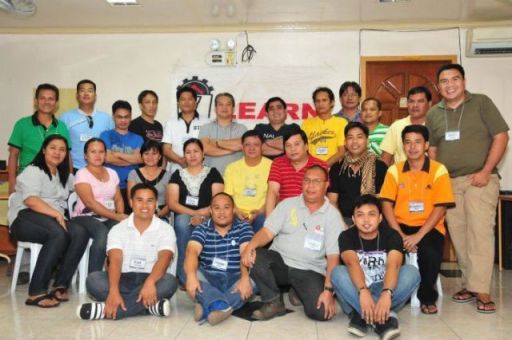 The National Alliance of Broadcast Unions (NABU) recently conducted another seminar that tackles grievance machinery functions and processes. The country\’s Queen City of the South, Cebu City, served as the latest stop for NABU\’s series of Grievance Handling seminars, which was held at the Institute of Religion and Culture, Philippines Hesed Seminar House in Guadalupe last September 13-14, 2011.

More than twenty shop stewards and officers from unions representing major broadcasting stations in the province of Cebu have joined in. These stations include ABS-CBN-2, IBC-13, ABC-5, IBM and PTV-4.

Close to forty (40) women participants from twelve (12) organizations in Mega Manila came. Being more committed to assert and defend women\’s rights and issues, the women leaders and officers vowed to disseminate the lessons and insights that they acquired during the seminar to their fellow members of their respective organizations. 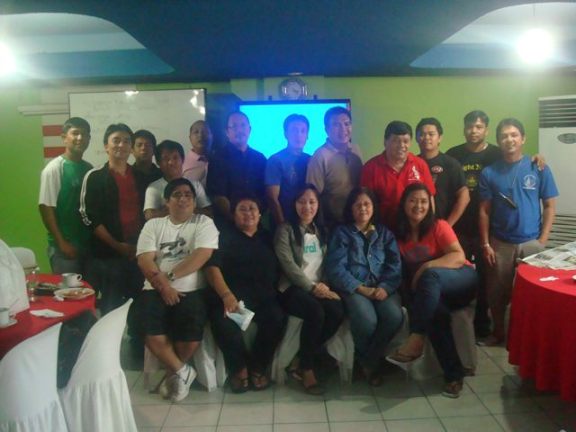 In its effort to protect the rights of media workers in the Philippines, the Labor Education and Research Network has again carried out another labor education activity involving media men and women under the umbrella organization National Alliance of Broadcast Unions or NABU. The 2-day seminar was done at the Star Plaza Hotel in Dagupan City, Pangasinan on August 26-27, 2011.

Present in the activity were twenty-one participants coming from various ABS-CBN-2, GMA-7, ABC-5 and PTV-NBN-4 stations in the northern part of Luzon. All of them are shop stewards from these three huge broadcast networks in the Philippines that have been longtime partners of NABU in its education and organizing activities. Participating stations were from the cities of Dagupan, Olongapo, Baguio, Laoag, and Tuguegarao.

A Basic Grievance Handling Seminar, undertaken mostly by shop stewards and officers of trade unions, usually involves the task of equipping unions with a functional mechanism to address grievance cases filed by employees against their employers or vice versa. The task of shop stewards forms an integral part of the so-called grievance machinery that facilitates labor-related cases within a unionized company. Once cases are resolved at this level, workers may opt not to file charges in the proper courts anymore.

An active member of LEARN, NABU is the first and only broadcast federation in the Philippines and also considered as the only broadcast formation in Southeast Asia. Among its founding members are the following labor unions: RVEU and RVSU in Radio Veritas; ABS-CBNEU and ABS-CBN Global in ABS-CBN; PTEA/NBN in PTV-4, ABC-5EU in ABC-5; GMAEU in GMA-7; RPNEU and RPNDSU in RPN-9; and IBCEU and IBCSDU in IBC-13.

The Alliance of Filipino Workers (AFW), in cooperation with the Labor Education and Research Network (LEARN), conducted a three-day Specialized Course on Paralegal Training for Personnel, Officers and Shop Stewards of Local Affiliates of the Alliance of Filipino Workers. This training was held from August 18 to August 20 at Sitio Lucia Training Center and Hotel Resort in Sta. Maria, Bulacan.

The training course gathered around 30 participants from AFW affiliates in about ten (10) major hospitals in the National Capital Region and nearby Mega Manila areas. The AFW is formerly known as the National Hospital Employees Association (NHEA), which was established in 1973. 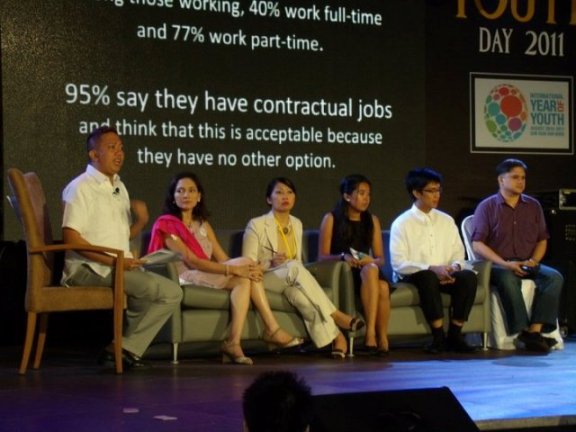 Nice Coronacion of Alliance of Progressive Labor-Youth, along with other APL-Youth leaders and members condemned contractual employment among the youth sector in the Philippines in a talk show at the SMX Convention Center in Pasay City on August 12, 2011.

The show was part of a larger whole-day program called KA-JAM or Kabataan (Youth) Jobs and Alternatives to Migration in celebration of this year’s United Nations’ International Youth Day (IYD). The event was graced by President Benigno Simeon Aquino III and several foreign dignitaries from countries like Spain. UN and ILO representatives were also present in the said activity, which was organized by the MDG Fund Joint Programme on Alternatives to Migration: Decent Work for Filipino Youth in cooperation with the National Youth Commission under the Office of the President of the Philippines.

Coronacion pointed out that given other choices, the youth would not prefer to go abroad for employment or undergo low-quality and precarious jobs. The passage of Security of Tenure Bill has also been supported publicly by the APL’s youth wing, as reflected in its IYD Statement. 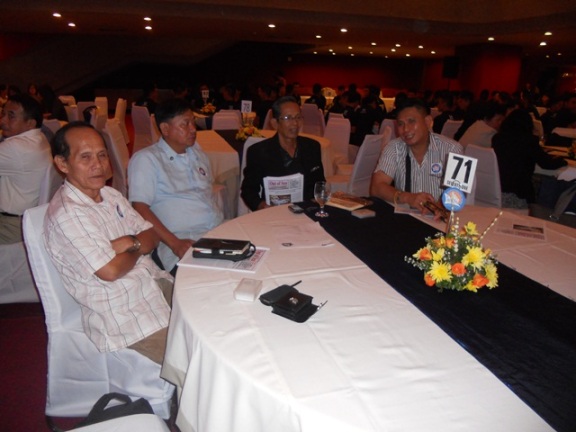 The Mariners’ Association for Regional and International Networking Organization (MARINO) graced with their presence the very first International Seafarer Family Convention (ISFC) 2011 held at the Philippine International Convention Center in Pasay City on August 4 and 5.

The First ISFC, which also featured an exhibit by numerous manning agencies, seafarers’ organizations, among others, had the theme, “The Bonds of Families, the Success of the World.”

Some of the issues that were tackled in the convention, as articulated primarily by DOLE Secretary Rosalinda Baldoz in behalf of President Benigno Simeon C. Aquino III, include the possible ratification of the Maritime Labor Convention of 2006, additional scholarship grants for seafarers’ kin, the Philippines’ status as the “crewing capital of the world”, inclusion of family members in the pre-departure orientation sessions for seafarers, empowering women and seafarers’ wives, piracy response, HIV-AIDS, and issues confronting the youth.

The International Transport Workers’ Federation (ITF) Seafarers’ Trust played an instrumental role in the success of the event. The Trust helped bring some 11 families from partner organizations in Southeast Asian countries including the Philippines, Indonesia, and Thailand.

Earlier this year, MARINO President Milton Unso called for the regulation of the Commission on Higher Education of maritime courses in the country to prevent students from adding to the pool of surplus graduates of maritime programs despite hearing positive remarks from various VIPs including the President. In separate statements, Secretary Baldoz said that the Philippines has been added again to the International Maritime Organization White List, which means that the country is compliant to the Standards of Training, Certification & Watchkeeping Convention of 1995. Nevertheless, Baldoz admitted that CHEd still has to close down several training centers and academies that offer marine-related courses to respond to MARINO’s concerns regarding the oversupply of maritime graduates and poor quality of education. Reports have it that at least three schools were shut down already in the National Capital Region alone but this still has to be verified with the commission.

In the coming months, Unso said that MARINO will closely monitor the ratification of the Maritime Labor Convention and Seafarers\’ Identity Documents Convention (C185), implementation of management level courses required under SCTW guidelines, social protection programs for seafarers and their dependents and actions taken by CHED on noncompliant maritime academies. 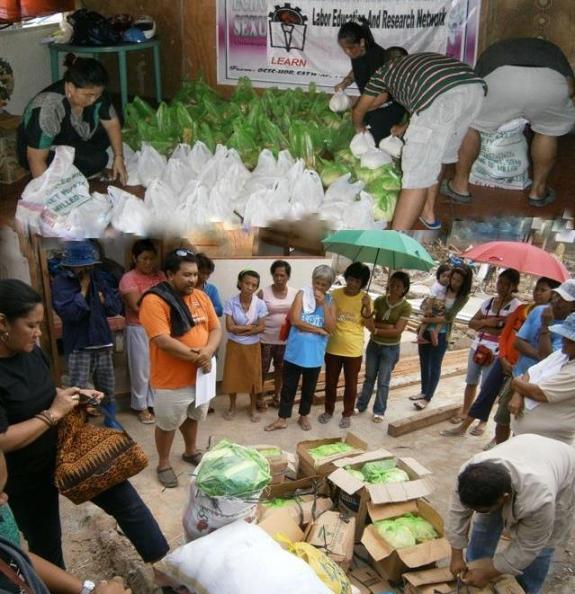 APL-Women chapters in Mindanao prepare for a new round of solidarity support to typhoon-afflicted sisters in areas hard-hit by typhoon Falcon more than a month ago in Mindanao. Plans to conduct counseling and repair missions are being polished following a relief operation last July this year.

Dabawenia and WISE-GenSan (Women’s Initiative for Social Empowerment), APL-Women chapters based in Davao City and General Santos City, respectively, spearhead the operations with the support of the Labor Education and Research Network (LEARN) and the Alliance of Progressive Labor. The personnel of the organizations found evacuees in makeshift dwellings, whose foundations (house floors) were the only remnants of their former homes.

Last month, a successful relief dispatch was undertaken in a compound in Barangay Matina, Davao City that benefited almost a hundred people. This was done after LEARN conducted a Basic Women Awareness Seminar in General Santos City, which enabled WISE-member participants to provide clothes and other materials to the victims of typhoon Falcon. Grocery items were also packed by LEARN and APL staff with the help of Dabawenia Chair Pita Tomatao that were then handed-out to the beneficiaries.