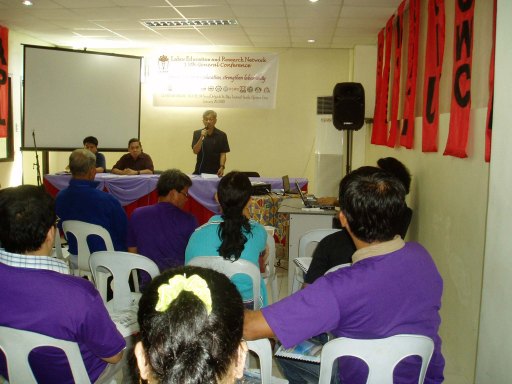 Close to 100 representatives from LEARN member and partner organizations attended in the two-part GC held at the LEARN Workers’ House. A twin-forum took place in the morning: issues and updates on the national and global economic crisis given by Aya Fabros of the research NGO Focus on the Global South; and a study on alternative dispute settlement mechanism, especially concerning a number of recent and controversial Supreme Court labor jurisprudences, presented by Atty. Lito Calivoso of Saligan (Sentro ng Alternatibong Lingap Panligal).

Given emphasis during the discussions is the decisive role of neoliberal economic policies in the current worldwide crisis. On the other hand, one of the highlights in the second topic was the Saligan research that found out that if a case involves less than five workers, it would most likely be decided by DOLE or the courts in favor of the workers; while cases involving a union would generally mean the employers would win the case in the courts. This study would be used in the legislative agenda campaigns by LEARN and its allied organizations.

The GC proper began in the afternoon following the solidarity messages delivered by representatives, as well as those sent, from LEARN fraternal and sister organizations. After reviewing the minutes of the 14th GC and LEARN reports, the delegates adopted the strategic 12-point program for the years 2010-2012. A spirited discussion ensued before the body unanimously agreed on the three resolutions presented.

The resolutions include accepting a new classification of LEARN member – individual associate member – who will enjoy certain rights and privileges, except to vote and be voted as LEARN officer, and who will have to pay an annual dues of $100 or its peso equivalent; renewing LEARN support to Akbayan in the 2010 party-list elections as well as endorsing the senatorial bid of Akbayan Rep. Risa Hontiveros-Baraquel; and reaffirming LEARN’s unity agenda through developing various formations that would strengthen the ranks of organized labor.

The GC is LEARN’s highest decision making body; an assembly every three years of LEARN member organizations (full-fledged, dues-paying and with voting power) to elect its nine-person BOT, who will in turn vote among themselves the five-member Adcom. LEARN’s executive director also sits in the BOT as an ex officio member. Likewise, highlights of the past and proposed general program of actions of LEARN are presented and discussed in the GC.

Among the guests who graced the 15th GC were Akbayan Rep. Walden Bello; Mirko Herberg, resident representative of the Friedrich-Ebert Stiftung (FES)-Philippines; Marlon Quesada of SASK (Trade Union Solidarity Center of Finland); Floro Francisco of LO-Norway; leaders of the League of Independent Bank Organizations (LIBO) and the Philippine Metalworkers’ Alliance (PMA), among others.