Delegates from the Global Network partner organizations joined the NAGKAISA in celebrating Bonifacio day as the fifth World Social Forum on Migration (WSFM) concludes. The Global Network delegates from Asian, European and Latin American countries flew to Manila to participate in the 5 day-long gathering of migration progressives and activists. The WSFM culminated in a march of more than six-thousand workers and activists from Espana Avenue to Mendiola on 30 November. 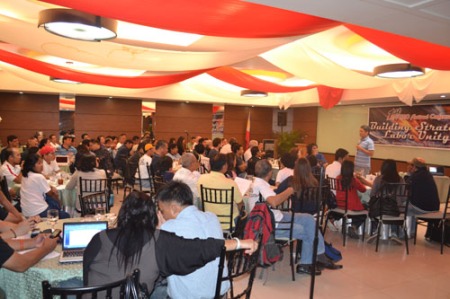 Representatives of LO Norway, the biggest worker organization in Norway, with SEKO met with the leaders of SENTRO last 27 October at the LEARN Workers’ House.

The undersigned is the executive director of the Labor Education and Research Network Inc., a duly registered NGO or non-government organization founded in 1986 that provides various services (education, research, publication, networking, etc.) to workers in the private, public and informal sectors. LEARN has currently 13 full-fledged member organizations and about 100 partner organizations nationwide, mostly directly involved in the country’s labor movement and other social advocacies. Members of the LEARN Board of Trustees are in fact leaders of different trade unions and other mass organizations.

I am writing you in behalf of the said affiliate organizations of LEARN to express our categorical support for the Akbayan party-list in view of malicious attempts of some dubious groups to portray Akbayan as allegedly not representing the marginalized and underrepresented sectors of society. Hence, the outrageous calls to disqualify Akbayan from joining the party-list election next year.

Akbayan is in fact composed of organizations and individuals from the basic sectors of society – workers, farmers, informal settlers, women, youth, indigenous communities, professionals, etc. LEARN, for instance, is one of the many NGOs and people’s organizations (POs) involved in the party-building efforts as early as 1994 that eventually led to the formal establishment of Akbayan in 1998. These mass organizations again actively campaigned for Akbayan from the first PL polls in 1998 and in all succeeding elections, including next year. Moreover, Akbayan has championed in Congress a long list of advocacies as well as other issues and concerns that benefited the basic sectors that the party has vowed to stand up for.

Its role in pushing for the passage of the Security of Tenure Bill in Congress that would serve to protect the rights of contractual employees is a clear proof that Akbayan champions the interests of neglected and marginalized sectors of our country. Likewise, Akbayan was instrumental in the pushing for the Right to Labor Organization law which further strengthened the constitutional right of workers to organize. Akbayan has also consistently showed its support for the numerous struggles of the workers against the abuses of powerful corporate interests.

We urge Comelec to see Akbayan for what it is, a crucial advocate and ally of workers inside Congress. Its disqualification from the partylist elections will only deal a huge blow against the campaign of workers for better and decent work. Thus, we respectfully ask the Comelec to treat the said disqualification moves as nothing but a nuisance act or pure and simple heckling from groups envious of the achievements of Akbayan. Thank you.